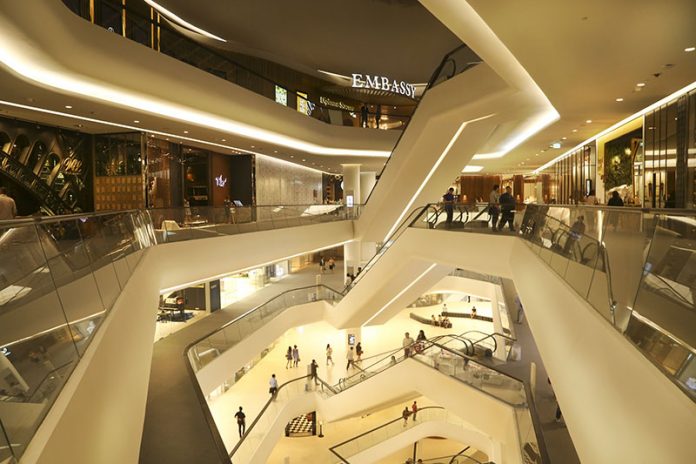 Bangkok may not be internationally famous for its lavish shopping malls, but perhaps it should be. Bangkok residents and tourists alike still spend a great deal of time visiting the city’s malls, and they have plenty of choice with more to come.

New malls are sprouting up all over the city, with seemingly no expense spared on elaborate facilities. A relatively recent example was the opening of the flamboyant Icon Siam mall situated along the Chao Phraya river, complete with its own express boat service. The mall cost a staggering 54 billion baht and it was reported that 1 billion baht was spent on its grand opening day party alone.

Yet, can this steadfast expansion of new malls continue especially in the face of steadily rising e-commerce popularity?

Well it pays to look at just what malls are offering to their visitors, because it is more than just shopping.

Voralak Tulaphorn, chief marketing officer of The Mall Group, was quoted as saying, “We believe that Thais still come to retail complexes with the primary purpose of eating food,” adding, “We have positioned ourselves as a food destination for the next several years. About 30-40% of tenants are food businesses, up from 10-20% in the past five years.”

Dining is a distinction that online shopping cannot easily replicate. As such, the expectations of increased e-commerce activity have not dented the overall enthusiasm for new malls being developed in the city. Besides, e-commerce, whilst growing rapidly is still only expected to account for 10 per cent of retail activity by 2024, leaving the vast majority firmly in the domain of the real world. As well, a majority of online shoppers are located in up-country locations where there may be less shopping choices available, and where the requirement to travel a much larger distance exists.

Still a look across to the US shows a worrying trend with regard to shopping malls. They also had restaurants and other facilities but after having had their hey-day, many are now lying abandoned as boom turned to bust. Half of the existing out of town shopping malls are expected to close down by 2030. Could this happen in Bangkok in the future?

Well there are some key differences. The main one is that out of town shopping malls in the US were often exactly that, built away from city centers to serve growing suburbs. However the trend is that people are moving into cities, rendering suburban malls to some extent, obsolete.

In Bangkok, most of the malls are within the city and are much closer to the burgeoning population.

Ms. Voralak was quoted as saying, “Retail in Thailand will be disrupted in a slower manner than what happened in the US, because US department stores are located far from customers’ homes, while in Bangkok we can find up to four retail outlets on the same road,” adding, “On-the-ground shopping is still important. Major online companies like Amazon or Alibaba have even extended their business to physical retail stores.”

An over supply of malls was also a problem in the U.S., but according to CBRE Research, even with more malls coming on line soon, Bangkok is still actually underserved. The city has just 7.5 million square meters of retail space for 12 million people, a per capita ratio lower than that seen in Singapore and Hong Kong, and nearly four times less than in the U.S.

Bangkok’s retail businessesappear to be enjoying quite a renaissance in shopping malls. This can be seen from the fact that downtownprime retail space is currently 94.8 per cent occupied and is commanding a healthy average of 2,600 baht per square meter in monthly rents.

Phensiri Sathianvongnusar, chief executive of e-commerce service provider, aCommerce, was quoted as saying, “There is still room for mega-malls to grow in Bangkok, as the majority of retail still takes place in brick-and-mortar locations despite the growing trend online,” adding, “Thai consumers think that going to a mall is part of their lifestyle and the place where they enjoy the social and experiential aspects of shopping.”