In the last article in the series we looked at the role of technical analysis and how various indicators can be harnessed to aid trading.

Moving averages are not that exciting however. They are not a wonder indicator. They simply show a smoothed out share price over the course of time in an attempt to show a trend. With share prices so volatile, and with all the confusing signals given by spiky price movements, moving averages could be said to be an invaluable tool.

A simple 25-day moving average, for example, works by gathering the closing share prices for the last 25 days, adding them together and dividing the result by 25. You will then have a single number that will be the average closing price for the last 25 days. The following day you will do the same calculation, lopping off the oldest ’26th’ day and recalculating the average to include the new day. Of course 24 of the old days will remain in the calculation as they did previously, the only difference will be the new day that you added, and the oldest day removed. This new figure will become the next days result.

After several days you will be able to create a line that represents the different averages and this will represent a smoothed out version of the market – a 25-day moving average. The line will be smooth because of the fact that only one day in 25 has changed. Even if the change in the stock price on a given day was very large, it would not show a massive difference in the moving average as it will be blended into the calculation with the other 24 days’ data.

The value of moving averages

Apart from showing the trend line of a security or index in a very smoothed out and simple to read fashion, moving averages also act as market indicators.

In the example of a 25-day moving average, it can be seen that at any given point in time you have calculated the average price that the market was willing to pay for a security over the last 25 days. It’s a way of identifying a consensus, which is free from daily volatility.

If on the other hand the stock price moves above and beyond the moving average then this shows that the price the stock is selling for now has beaten the 25 days’ average consensus, and could indicate a buy signal.

25 days has just been chosen as an example. More common moving average cycles are 20, 50, 100 and 200 days with others used from time to time. For shorter-term trades, you could elect to use different time frames e.g. updating hourly instead of daily.

The best use of the moving average indicator is to buy or sell on the right side of the market having identified the trend, even if it is a little late. 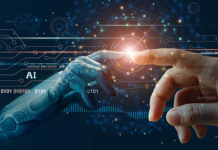