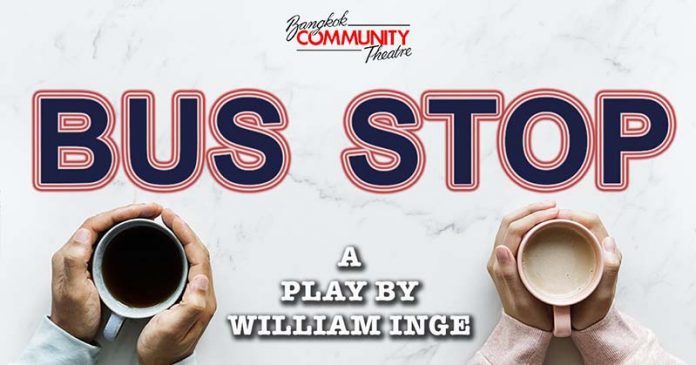 In this month of September, BCT will stage the charming romantic comedy Bus Stop, written by William Inge, directed by Michael Allman, which will bring American slice-of-life to Bangkok.

The story: In the middle of a howling snowstorm, a bus out of Kansas City, Missouri pulls up at a cheerful roadside diner. All roads are blocked, and four or five weary travelers are going to have to hole up until morning. Cherie, a nightclub chanteuse, is the passenger with most to worry about. She’s been pursued, made love to and finally kidnapped by a twenty-one-year-old cowboy with a ranch of his own and the romantic methods of an unusually headstrong bull. The belligerent cowhand is right behind her, ready to sling her over his shoulder and carry her, alive and kicking, all the way to Montana. Even as she’s ducking out from under his clumsy but confident embraces, and screeching at him fiercely to shut him up, she pauses to furrow her forehead and muse, “Somehow deep inside of me I got a funny feeling I’m gonna end up in Montana”. As a counterpoint to the main romance, the proprietor of the cafe and the bus driver at last find time to develop a friendship of their own; a middle-age scholar comes to terms with himself; and a young girl who works in the cafe also gets her first taste of romance.