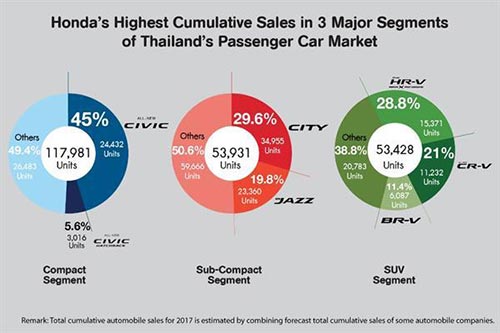 Honda Automobile (Thailand) Co., Ltd. has retained the No. 1 position in Thailand’s passenger car market for the third year in a row, with cumulative sales for 2017 of 127,768 units (including the Honda BR-V, HR-V, and CR-V) and captured a 32.2% market share. Honda also ranked in the No. 1 position for cumulative sales in three main market segments, which are sub-compact, compact, and SUV vehicles. The company is committed to moving forward to develop automobiles and services in return for a growing number of customers who put their trust in the Honda brand.

Officer of Honda Automobile (Thailand) Co., Ltd., said, “Last year, Thailand’s overall automobile market continued to recover, growing about 13%, which is the highest growth in the past five years. Honda’s sales in 2017 were 19% higher than 2016 because of overwhelming customer acceptance of the five automobile models we launched last year – the Honda City, Honda Civic Hatchback, Honda CR-V, Honda Jazz, and Honda Mobilio, as well as customer confidence in the quality of Honda products. As a result, Honda has been ranked No. 1 in the Thai passenger car market for the third year in a row.”

In addition to achieving the highest sales in 2017, Honda received the Outstanding Brand Image for Trusted Brand award for the sixth consecutive year, from 2012 to 2017, from the Thailand Automotive Quality Awards (TAQA).

“We would like to thank all our customers for their confidence and trust in Honda automobiles. We will continue to strive to expand the potential of our customers’ lives through our products and advanced driving technologies, meeting the daily needs of our customers’ various lifestyles, while enhancing service standards for the highest customer satisfaction. Honda will continue to fulfill the company’s vision of bringing joy to our customer’s lives and being a company that society wants to exist,” concluded Mr. Pitak.