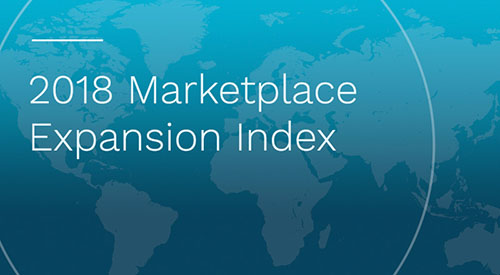 According to a recent study called “The 2018 Marketplace Expansion Index” that was commissioned by payment solution company Hyperwallet, Thailand has been selected as one of 36 countries out of 209 for further expansion. The study took place to ascertain which countries were the most attractive for e-commerce marketplaces to set up next year. Several factors were considered in the rankings including quality and availability of workforce, e-commerce fundamentals and foreign competition. In all ten separate factors were taken into account.

Thailand came in at number 34 out of the 36 chosen countries. The competition was global and so developed nations were also in the rankings including the US, UK, Singapore and Australia.

Even though Thailand’s 34th place may seem towards the bottom of the tier, it beat out some 173 other countries in order to make it into the top 36, and competition was fierce.

The top tier of 12 countries that were ranked as established were made up of Germany, The UK, The U.S, Australia, Singapore, Austria, The Netherlands, South Korea, Canada, India, Singapore and Denmark.

All of these countries had under their belt a large e-commerce market exceeding 50 billion US Dollars per year. In addition they were deemed to have large e-commerce platforms such as Taobao in China, Amazon in the U.S. and Uber in many countries that enable activities in the retail sector to flourish.

As well, it was deemed that the established countries had well trusted and advanced e-payment systems in place allowing the e-commerce retailers to accept payments and to build their business quickly without any significant barriers.

The fact that Thailand ranked 34th and was placed in the evolving category could be enticing for new e-commerce platforms, since the Kingdom is without any huge dominating e-commerce players. In fact where established countries had dominant players, the ability to break into those markets was hindered somewhat by their enormity.

Thailand could also be enticing since consumers are rapidly moving towards e-commerce for their purchases. The e-commerce sector grew more than 20 per cent year on year.

In Asia, some other countries outperformed Thailand, such as Malaysia in 24th position, Indonesia in 18th and Singapore in 8th, but at the same time, from a workforce perspective, Thailand boasts a large freelance pool of e-commerce workers, which should help any new start-up to come online quickly.