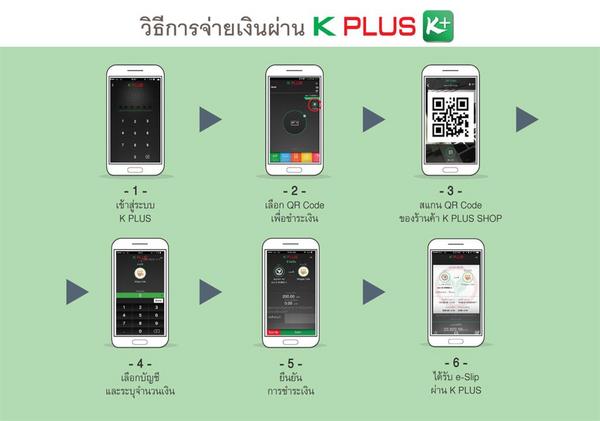 KBank cements its leadership in digital banking by launching “K PLUS SHOP”, the QR code mobile payment technology which is the first of its kind in Thailand, to facilitate business transaction, allowing users to “Pay Instantly via Scanning”. The service targets three groups of merchants relating to food and beverage (F&B), retail fashion and daily commuter services. QR code payment service will debut at more than 10,000 stores in three locations – Siam Square, Chatuchak Weekend Market and Platinum Fashion Mall Pratunam – before expanding nationwide by year-end. KBank targets more than 200,000 merchants with 800 million Baht in transaction value by the end of this year.

eanwhile, users can employ QR code reader features on any mobile banking app to be scanned at the merchant’s QR code to make payment and the merchant can accept electronic payment instantly. In the future, Chinese tourists travelling to Thailand can pay their bills via QR code scan by using their popular apps namely Alipay and WeChat. K PLUS Shop thus offers an option which allows customers to pay their bills with convenience, speed and security, representing an innovation to drive Thailand towards being a cashless society in accordance with government policy.

K PLUS SHOP will boost merchants’ potential and opportunity to sell their goods and services, driven by the growing popularity of mobile banking. Consumers increasingly conduct their financial transactions via smartphone, as seen by a 50-percent rise in mobile banking users in the entire commercial banking system in 2016; K PLUS is the market leader in mobile banking, with more than 6 million users. Merchants are looking for convenient financial services which offer a “Seamless Experience of Mobile Wallet” to swiftly respond to the “Now” demands of their customers.

K PLUS SHOP, a new term for “Pay Instantly via Scanning”, uses the advanced technology of QR code to offer payment with speed, convenience and security to customers and merchants, for payments of no more than 50,000 Baht/transaction. Merchants initially joining the digital banking program are in the businesses of F&B, retail fashion and those related to daily commuter services such as motorcycle taxis. The service will initially be available at more than 10,000 stores in three major shopping areas in Bangkok, namely Siam Square, Chatuchak Weekend Market and Platinum Fashion Mall Pratunam.

The K PLUS SHOP app is convenient and easy to use. Merchants can download the K PLUS SHOP app instantly if they already have the K PLUS app, with no application fee or service fee. This app can help merchants solve a score of cash management problems, in particular when they have no change. After payment has been automatically credited into their account, they will get a transaction report, along with sales summaries on daily, weekly and monthly bases. Meanwhile, users can employ QR code reader features on any mobile banking app to be scanned at the merchant’s QR code to make payment and the merchant can accept electronic payment instantly.

Mr. Patchara said, “During the first year of introducing K PLUS SHOP, the focus will be on promoting awareness of the app among merchants and consumers so that they understand the QR code technology, being the latest trend in the global settlement system. We are upbeat that payments made via QR code will be popular in Thailand because it can be used at any retail store or small business, such as grocery stores, cook-to-order restaurants, motorcycle taxis and large retail outlets. Application for K PLUS SHOP is simple because only a KBank account is required. The service does not set a minimum payment amount. Payers and payees do not have to pay any service fee.”

During the introduction period, any merchant downloading the K PLUS SHOP app and receiving first payments of at least 200 Baht/each are entitled to a 100-Baht cashback, and any customer using QR code to pay their bills for 300 Baht/transaction are entitled to a 50-Baht cashback (limited to one transaction/person per month) from now until December 31, 2017. KBank is targeting at least 200,000 downloads and 800 million Baht in transaction value made via K PLUS SHOP by year-end 2017.